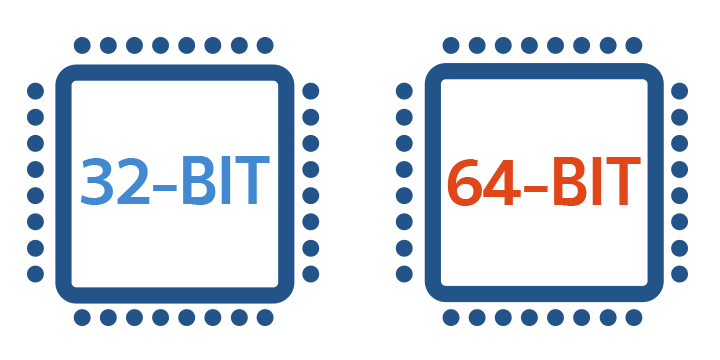 A quick search on our hype evaluation machine also known as google reveals just shy of   64,70,000   hits about 64-bit vs 32-bit processors. Some of this hype was started by the pc crowd back when AMD launched its first desktop pc 64bit CPU back in 2003. But since last fall’s launch of the iPhone 5s the first smartphone with a 64-bit CPU it’s become a hot topic again. But what does it mean for average Joe?

Let’s start with what a bit is very briefly here. 1 bit is a single character and binary either 1 or 0. So we can only express up to 2 values. With 2 bits we can express up to 4 values and with 3 bits that go up to 8. Every bit we add increases the number of different values we can represent in binary exponentially. Now you’ll hear about bits about all kinds of computer things from data storage to data transmission to data processing.

So that brings us back to the CPU. In the context of a processor, the number of bits generally refers to the amount of memory it can address. So while a 32-bit processor is limited to about 4 gigabytes of memory or Ram. A 64-bit processor can handle up to 16 billion gigabytes of RAM. Alright – that sounds interesting more ram is good for performance right to bring on the bit wheres my 128 bit, hold on a second there cool your rainbows, my pony friend. More ram is only beneficial if you need it to store data that apply to the task your processor is working on at a given time. Adding more RAM – this isn’t going to make the mouse move faster so move to more bits for processors it’s not something to be undertaken for no reason.

Aside from the hardware re-engineering and instruction set architecture extension or re-design it involves a complete rewrite of fundamental parts of the operating system via windows, OS x and Linux, Android, iOS or whatever. They require specific driver software for all hardware components that will be used and finally application developers will need to at least recompile and debug their code just to achieve basic compatibility without taking advantage of any performance improvements.

Well okay, but I want that shiny new 64-bit processor. Maybe the entire hardware and software industries will cooperate for fast migration for the first time so I can have huge performance gains right. Here we are over 12 years after the release of the Athlon 64 and in addition to most of the applications on my 64-bit pc anyway running in 32-bit mode. Furthermore, if you think a 64-bit processor is faster then  I’m afraid you’ve bought into the hype my friends for certain workloads. And nothing you’re doing on your phone at the moment there will be a benefit. But in most cases what you’re benefiting from is that a 64-bit CPU will tend to have a newer more robust design overall with more registers functional units, memory bandwidth, and all that other stuff. So until we need more than 4 gigs of ram for our phone applications which who knows may not be that far away. The 64-bit is just unnecessary transition being packaged up for the general consumer as a selling point.

Difference between 32-bit and 64-bit processors