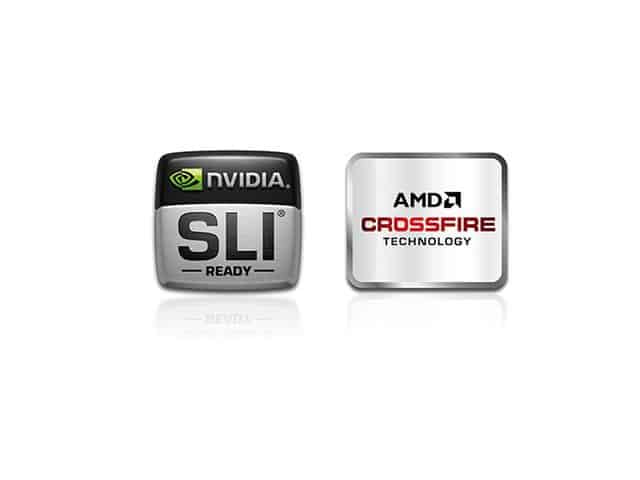 Truthfully it’s not that simple anyway there are some critical differences between SLI and crossfire. That I believe demonstrate a fundamental difference in philosophy between AMD and NVIDIA. But first the basics, both technologies are pretty much a way to utilize more than one graphics card working in tandem in your pc to achieve on the next-gen class performance that wouldn’t otherwise be available with the current technology, due to power, thermal or other limitations.

They both work with anywhere from two to three or even four compatible cards in one system and perform their best at high resolutions with graphically demanding games. They also both dramatically increase the power consumption and heat output of your computer system without having a proportional impact on the performance you’ll get in games. In fact, another thing they share in common is that if the game doesn’t have a profile implemented they may not improve performance at all. But with that said if you’re looking for an experienced that simply isn’t available today by other means like butter smooth 4k or 1080p surround gaming then you’re likely one of the folks that the solution was designed for.

All right so a moment ago I mentioned compatible cards, This is differentiation.

1. Number one for AMD, Well Nvidia allows mix and matching of vendors and clock speeds. You can SLI an EVGA reference card with an Asus overclocked one. They require you to use the same graphics processor with the same memory configuration AMD, on the other hand, is pretty loosey-goosey you can mix vendors, clock speeds, ram amounts, and even the graphics processor as long as the cards are within the same architectural family. So, for example, a 7973 gig card can CrossFire with a 7950 with 3 gigs or even in R9 280x with 6 gigs of ram cuz all based on that same GPU.

2. Differentiation number two for AMD is cost, Nvidia requires SLI certification for your cards to recognize your system is compatible and activate their wonder twin powers. For that Nvidia requires the qualifying PCI express slots to run at 8x minimum, even though these days a 4x PCIe gen3 slot is plenty for pretty much any graphics card and they require the board manufacturer to pay a licensing fee. You can find AMD crossfire compatibility on product pages for the like business class board is basically anything goes as long as it’s got a couple of PCI express 16x physical slots.

3.  Differentiation number three is that AME allows their cards, their low-end cards to run in crossfire with the onboard graphics of their APU’s which are CPUs that have strong onboard graphics components.

Although the solution still needs some work to be something that I really recommend and I guess that’s it I guess that’s the philosophical difference between AMD and Nvidia. Nvidia locks things down which gives the entire control over the consistency of the user’s experience. But AMD offers more flexibility and choice even if some of these options aren’t the best thing ever, at least you can pick them.

AMD Crossfire vs NVIDIA SLI : which is better?