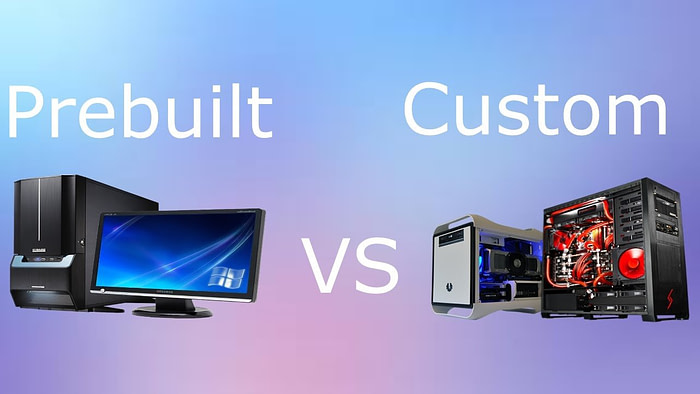 Yes, the age-old question of whether to build your pc or buy a prebuilt. And I am answering it once and for all and here it is. Some of you actually might not really like this but well anyway I feel the answer is to do whatever you want. There’s no absolute right way to buy a pc.

Let’s start by taking an objective look at some of the advantages to pre-built tier1 pcs.

1. Number one is discounted windows licenses for big system builders. Mean that particularly at the low-end pricing is just playing better than what you can achieve building it for yourself.

2. Number two is that some people just want a warranty. Yes, I know your CPU comes with a warranty, your memory comes to the warranty but lots of people don’t want to deal with that. You might as well tell them if they want anything fixed they’ll have to diagnose it pull that part out ship it to the individual manufacturer and then reinstall it when the new one arrives. We’ll be all like what are you high. I just take my mac to the apple store and they’ll fix it for me.

3. Number three is closely related to the number one support. Not everyone has a tech-savvy niece or nephew to help them diagnose issues. They just wanted to plain work out of the box and if it doesn’t they want to call someone to help them.

The next option is getting a rig from a custom or boutique system builder the advantages here are pretty simple.

1. Number one is customizability. Many boutique builders offer extensive options for the different components that you can have them install. And if you’re willing to do a little bit of learning about the parts you can get something that’s just right for you even if you don’t want to deal with the hassle of actually assembling it.

2. Number two ties in pretty close to the last one and its quality. If you’re buying a mid-range to high-end custom system from a reputable builder they are using better components than any tier one commodity system. Your pc will likely run cooler be quieter and last longer.

3. Number three is time. I know I know I’ve heard it over and over what time it doesn’t take that long to build a pc. You know what those people are are right actually but this is my response you know what does take a long time troubleshooting a pc. This is especially true if you don’t have a garage full of spare parts to use for diagnosing an issue lots of people don’t have a bucket of graphics cards on hand and they just don’t want to deal with that crap.

Building Your Own Custom Pc

1. Number one is picking everything for yourself and building your pc. You can save a few bucks and you can have fun doing it it’s great. I’ve been a pc tinker and hobbyist for the better part of my life now I even made a career out of it and I do all kinds of stuff that I know isn’t that practical because I just plain love it. Water cooling is a great example it just doesn’t make much sense from a performance standpoint anymore but I take pride in knowing that my system is faster runs quieter and looks better than anyone who isn’t willing to put in the time and effort can buy.

2. Benefit number two of DIY is infinite customizability and upgradability. Because you’ve been through the gauntlet of actually building it in the first place you never have to be afraid of the guts again and upgrading is easy. Just set aside some cash and some space in the closet for our graphics card bucket and then you’re all good.

3. Benefit number three is the community. The pc enthusiasts community is a great one to be a part of we talk shop about pcs all day and we love it being part of it is amazing.

There are risks associated with building it yourself and you’ll have no one else to point too if you break something but at least you’ll have other folks who have been there before to help you through it and for me, the benefits outweigh the risks.

4. This last one is one that I’m not a 100% sure how to classify some pc parts retailers also happened to offer assembly service you might not get the same degree of TLC that you do from a boutique builder that’s marking up the system by several hundred dollars just to put it together for you and test it and do all that stuff but you’re also saving a ton of money.