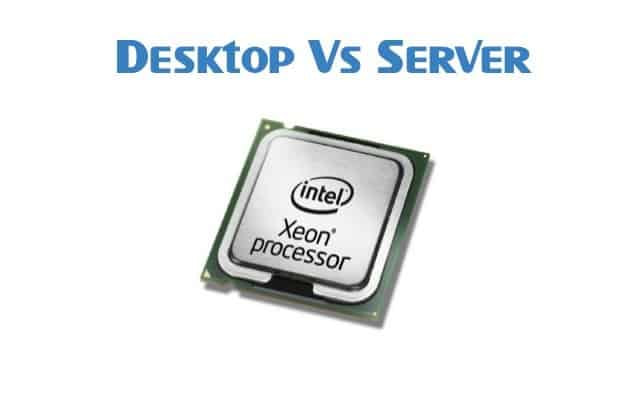 Okay so – there are desktop computers and then there’s like server computers but how different are they exactly. Well, any computer has the same basic components processor, working memory, storage, etc and you may be surprised to hear that fundamentally they’re not that different with some of those components even coming off the same assembly line. But that doesn’t mean that you can just grab off the shelf desktop components in like fashion yourself a server. I mean sure core i7 runs at 3.8 gigahertz and Xeon runs at 3.8 gigahertz but it costs way more. Well, sometimes there’s more to it than gigahertz and gigabytes. so let’s get this list of differences kicked off.

The difference between a server and a desktop computer

1. Server gear is much more expensive for specifications that often appear similar or even worse at times but why.

2. You get inter-compatibility with another server great Hardware. Things like ECC and registered ram support a bullet. that’s hidden halfway down the product page for that CPU from before. Now while using memory that is slightly more resistant to errors might not seem like a big deal to a typical desktop user. But it’s critical for a server. In a desktop environment, one little tiny Ram error caused by like cosmic rays might cost little Sally they cute picture she made in ms paint. But in a server, it could result in the loss of patient’s medical records or who knows what else. Not to mention speaking of inter compatibility that server memory is available in much higher capacities so you’ve got to have support for that.

3. I find the next difference in the little details. The characteristics of a product that don’t always find their way onto a spec. sheet. For example, server and workstation-grade Hardware uses higher quality components and is subjected to much more rigorous quality testing and validation they not only are made to handle heavier-duty cycles but also live longer overall while doing it.

4. Now on the features silent operation, a bunch of USB 3.0 port and like overclocking settings out the wazoo are not the kinds of things that server clients will want to spend money on which doesn’t mean that they’re cheapskates. They’ll pay big money for stuff like fancy networking capabilities, remote management interfaces, and hardware redundancy so the machine won’t experience any downtime even in the event of a hardware failure on something like a power supply and it’s great that they buy this stuff because it drives the costs down for us desktop folks in the future.

5. So my next point ties at least partially into most of the other server hardware is optimized for different workloads. For example, on the desktop, our applications aren’t heavily multi-threaded so higher frequency processors with fewer cores work well. But a server might run an operating system and software that takes much better advantage of multiple processing cores. So we might get much better results with a lower clock server CPU that has more processing cores or even with multiple CPUs to further spread up the workload. And then finally there are the optimizations made for the environment in which a server will operate.

For example, a consumer and enterprise-grade hard drive might share much of the same technology but a server hard drive is much more resistant to wear and tear from vibration something that doesn’t matter for a drive sitting in the desktop by itself but that is critical for a drive that surrounded by other drives spinning and clicking away doing their work. And there are so many little things like this a server won’t compromise on power consumption or increase size unnecessarily to squeeze a little bit more performance out of the hardware like a gaming rig. It’s all about how much computing power can fit as smaller space as possible while consuming as little power as possible. The general consumer has different priorities in a big Tower that consumes a couple more wats doesn’t matter when you got one family pc in the house or even two or three or four. But if you were buying five thousand of them it would be a different story.