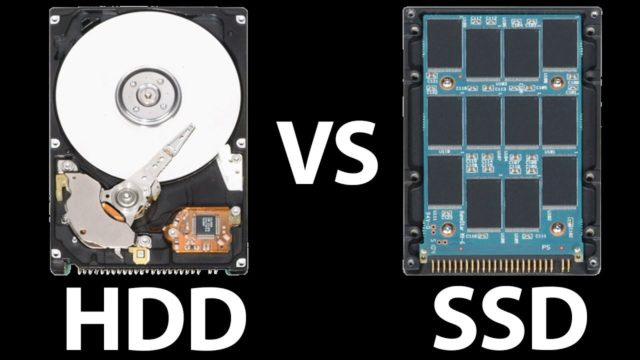 Honestly, it’s sort of like asking which is better a motorcycle or a semi-truck. All right so you might be sitting there going that’s a weird thing to say guinea pig, why would you say something like that. And the answer is because they’re not that comparable, they’re just different.

Let’s start with performance, when it comes to raw speed SSDs are faster. I see many folks comparing the sequential speed of an SSD to the sequential speed of a hard drive and say oh well they’re kind of similar. But the reality of it is unless you copy large files back and forth all day this specification is pretty much meaningless, I’m serious it has nothing to do with the way that they will do that you will perceive the performance in the real world. SSDs are all about little data transactions that happen all the time all over the place when you’re writing something like an operating system on them you know an instant message comes through, a program launches need to access a ton of little files all over the place. These are the times when not having to physically move ahead across the disk allows an SSD to utterly destroy a hard drive in terms of performance. In system responsiveness, any modern SSD will be easily several times faster than any hard drive and sometimes much more than that.

Okay, that’s great but what if you have lots of data to store and that’s your main concern. It’s not like playing back video or music files are looking at your archive of pictures requires blazing fast performance so this is where hard drives still excel. At this time a 160$ buys you either a 256 gigabyte SSD or a 4 terabyte hard drive. Yes, a 16 times larger hard drive for that kind of difference in price per gig you could build too hard-drive-based storage boxes and have one of them set up as an off-site backup with the money that you saved by not using an SSD based backup solution. So yes folks for mass storage of data we are a long way away from hard drives being replaced by SSD.

Okay but what about reliability, now this one’s a little bit complicated. Hard drives are pretty reliable these days but as devices with moving parts they will die eventually, the good news is they usually give warning signs like I if your hard drive is making clicking noises right now for example first check to make sure it hasn’t turned into a dolphin then replace it if it is still hard drive. But the bad news is that any kind of Use will wear them out for SSD reading from them a lot won’t wear them out very much especially if you keep them running cool, but if you write to them heavily you can kill a consumer-grade model relatively quickly. So I guess I put it this way in an environment where shock is an everyday occurrence such as in a notebook or tablet I would choose SSD every time in an environment where that’s not the case then reliability to me as a secondary factor after I determine my performance and storage needs. This leads us to the in-between solution hybrid drives these leverage the technology of hard drives and SSD at the same time but that’s a topic that I am planning to cover separately.

SSD vs HDD Which Is Better? And Which Type Of Data Storage Is Right For You?