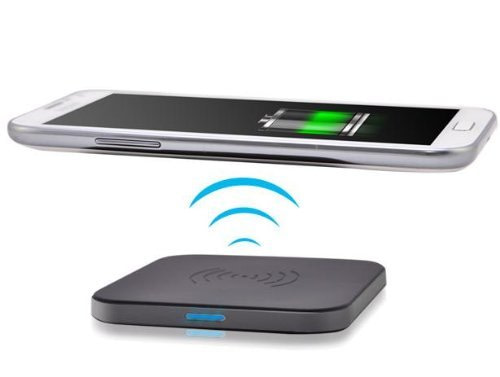 Now it’s no great secret that I hate the cables and fragile connectors that modern electronic devices used for battery recharging. But we’re just stuck with cable clutter right. Thanks to modern technology and by modern I mean demonstrated about a century ago by Nikola Tesla but now finally becoming a commercial product. Wireless power is here and we are very close to saying goodbye to cables forever.

But How does it work?

I could just say magnets and leave you to infer the rest but the actual science is much more interesting than that. Electricity and magnetism are much more closely related than many people realize. A current-carrying wire coil around an iron core is called an electromagnet because it uses alternating current electricity to generate a fluctuating magnetic field. Reversing the situation and applying a magnetic field whose polarity is constantly reversing to our wire coil will generate AC electricity. This is called electromagnetic induction and this is the basis of the wireless power solutions that we find in consumer-grade devices like phones and electric toothbrushes. And what’s great about it is that unlike microwave-based wireless power it is safe to have next to your head while you sleep or you know in your mouth and stuff.

1. Advantage number one is a big one and its convenience put your device down on its pad when you go to bed in a compatible dock in your car or even on the table in your favorite coffee shop and boom it’s charging

2. Advantage number two is no more worn out connectors. micro-USB can be as fragile and generally terrible as it wants if I only have to use it once in a while to load a new ROM in my phone love it.

1. But nothing is perfect so drawback number one is that it’s still not ubiquitous. It’s still too expensive for many manufacturers to include with their devices and most charging pads. I mean however cool this might be aren’t built anything yet and still need to sit there and be plugged into the wall. The good news is that aftermarket solutions aren’t too bad. A rear cover for galaxy s5 cost 30 bucks and a compatible pad on eBay is less than 20 bucks.

2. Number two is inefficiency compared to Wired charging. Your device will charge slower and heat up more. For me, this isn’t a big deal, when I’ve got time like when I’m sleeping I can charge wirelessly and when I’m in a hurry I can plugin.

3. Number three is that the range is very limited right now. You pretty much put the two surfaces right next to each other and orientation is picky with most devices. But solutions like using grooved surfaces or additional magnets to help with alignment have been used successfully to help with this and next-gen. solutions should help alleviate both of these issues a fair bit.

Now the last point here is something that I wasn’t sure how to classify in my list of pros and cons and that’s the speed at which this technology is developing. It’s advantageous because it means amazing new solutions are coming but it also ties into the biggest disadvantage yet which is compatibility. There are two main competing standards today and while they both rely on a power transmission pad and a compatible receiver either inside or attached to your device they don’t work with each other. Qi backed by the wireless power consortium is by far the most popular amongst consumers right now but PMA the standard backed by the power matters Alliance is likely to continue to gain support with corporate organizations and governments with their cloud-based controller software feature that allows these entities to better manage their wireless charging network. The Alliance for wireless power is yet another group and their residents Brandon resident magnetic coupling wireless charging standard looks as super exciting and promises to enable more convenient solutions by offering dramatically better range and multi-device charging while maintaining reasonable efficiency. They recently closed a standard consolidation deal with PMA though. So my point isn’t which one you should invest in now in terms of buying a bunch of gear but just that the standards war is just warming up with new developments coming hard and fast. At the end of the day though whether you’re a time child, A human or an guinea pig hopefully the thing we can all agree on is that wireless charging rocks and the future is going to be freaking awesome with like wireless charging that can be in the same room as you and provide power all your devices Space Age stuff man.

Wireless Charging : How It Works and The Pros and Cons